This is a question that has intrigued me for some time now. Some people say this question is irrelevant or even that it should not be asked. But to me it is relevant, especially since Toyota seems to have been struggling with this question themselves.

In April 2001 Toyota published a little booklet called “The Toyota Way 2001” to share its values.

Toyota needed a way to communicate these values to an ever growing group of employees and the traditional way of conveying this implicit knowledge did not fit the new era of Toyota being a truly global company.

In this booklet Toyota explains that The Toyota Way is supported by two main pillars:

In my quest to learn more about “The Toyota Way 2001” I searched for all the documents I could find about this topic.

I found more information in the sustainability reports that Toyota publishes every year. While reading these reports I found that there was an inconsistency in the order in which Toyota references the two main pillars. 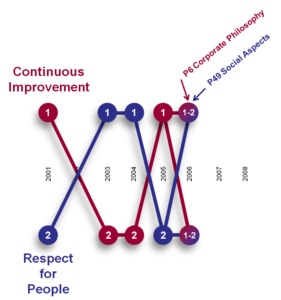 In the right graph you can see what I have found in these sustainability reports. In the original document the order was, as stated above:

Based on the information above one could conclude that the order does not matter, the two pillars are equally important and the question which one comes first is irrelevant 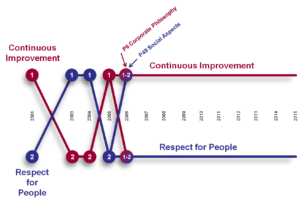 In the years following 2006 Toyota is consistent in the order in which they reference the two pillars:

What I learned from this additional information is:

So, I hope I made a case here, the question “what comes first” is  a relevant one. There must be good reasons why from 2007 onward Toyota consistently mentions Continuous Improvement as their first pillar and Respect for People second.

Based on this information I decided to do some experiments. I made a presentation about this topic and presented it at various occasions. I would start with a little introduction about “The Toyota Way 2001” and the two pillars. After that I would pop the question;

The answers came in three categories:

So, I already learned that in the beginning the order for Toyota was not so obvious, at least not to everyone in the company. Now I learned that the order is not obvious for many “lean interested people” and also that most people take a different turn than Toyota took since 2007.

I think that, in order to understand Lean better, it is important to understand “The Toyota Way 2001” better. What I would like to understand is why Toyota now references Continuous Improvement consistently as their first pillar and Respect for People as their second pillar. There must be good reasons for it!

So my next question to you all is:

Why do you think Continuous Improvement comes first?